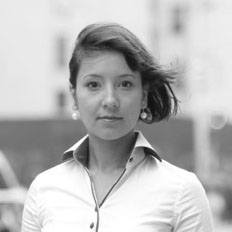 Guen built her first “Tamagotchi” app on her Texas Instruments TI-84 calculator when she was 12 years old. At age 14 she decided she wanted to become a physicist and build a quantum computer. She studied Applied Physics at Delft University of Technology while doing competitive Latin and Ballroom dancing at national level, teaching, freelance coding/webdesign and working at the start-up incubator YES!Delft. She worked on quantum computing experiments in Sydney, Australia and graphene optics in Barcelona, Spain. She won the first phase Valorization Grant for a business plan on low-noise electronics for quantum computing and made it to the final of New Venture and the Philips Innovation Award and was selected for the “Holland in the Valley” Start-up bootcamp to New York City. After this she did her PhD on superconductivity and quantum phenomena at complex oxide interfaces at the Center for Quantum Devices of the Niels Bohr Institute in Copenhagen, Denmark. During her scientific career she co-authored several publications, among which one in Science and Nature Materials. She moved into Nest Copenhagen in the summer of 2016.